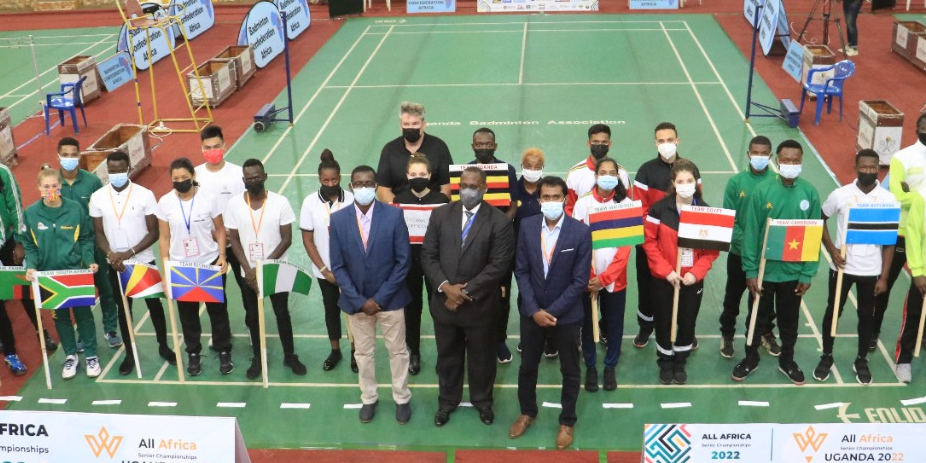 ALGERIA, EGYPT, AND UGANDA EASILY SAIL THROUGH THEIR MATCHES IN THE MORNING SESSION.

The All Africa Senior championships 2022 started today with a bang with surprise wins from Reunion and Uganda. Opening the games in a colourful opening ceremony, the BCA President, Mr. Michel Bau, thanked the hosts Uganda for unselfishly standing firm and agreeing to organize Africa’s premier event for the second time in a row.

“Throughout the past four years, we have managed to raise the presentation and profile of our tournaments in Africa. We still have much more to achieve, but we are glad to announce that the last All Africa Senior Championships in 2021 was the most-watched BCA event ever. Our fans, supporters, members, partners, and other stakeholders managed to follow the matches, on their screens, while being thousands of kilometres from Uganda. With your support, we are confident that records will be broken again this year – so do not hesitate to share the links so that your friends, parents, fans, and others can watch you live! Said the president.

In the morning session Group A women’s team event, the less fancied Reunion handed South Africa a shock defeat in Deidre Laurens Jordaan started South Africa well with a 21-15 21-12 win over Leperlier Estelle in the 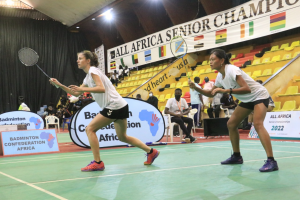 first women’s single. Mathilde Lepetit wasted no time and came from a game down to equalize for Reunion with a 2-1 win over Diane Oliver in the second women’s single. The score being level, it was game on in the third women’s single as Demi Botha of South Africa took on Audrey Lebon. Audrey took the first game 21-11, but Demi was able to recover in the second game to even the score. The third game saw Audrey cement her victory, dispatching Botha with a 21-14 score giving Reunion a 2-1 lead. It took the combined efforts of the dependable Amy Ackerman and Deidre in the first Women’s doubles to bring back the South Africans, setting up an exciting last match in the second women’s doubles. The pair of Ly-Hoa Chai and Mathilde carried the hopes of Reunion, in the last game and they didn’t disappoint. They came back from a game down to beat Demi Botha and Diane Oliver 2-1 to make Reunion the overall winner of the tie. South Africa did not have the services of Johanita Scholz, the reigning African Champion. 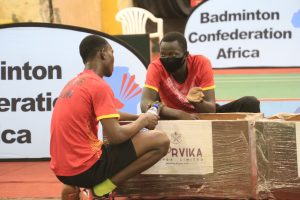 In the Men’s team event, hosts Uganda easily cruised past Benin 5-0 in the first encounter of Group B, while Reunion was no match for the defending champions Algeria losing 0-5.

The afternoon session featured teams in Groups A and C. Mauritius was awarded a walkover against Zimbabwe, who didn’t show up for their match in the men’s team event, while Egypt had an easy day at the office thrashing Cameroon 5-0 in the Men’s team event and getting an easy point from Zimbabwe’s no show in the Women’s team event.

It was not Benin’s day as they continued with their losing streak in the evening session against Algeria. The young Benin team showed a lot of promise but could not stop the 5-0 beating from the defending champions in the Men’s Team Event. Uganda had mixed results in the evening session with their Women’s Team causing one of the major upsets of the tournament in their clinical 4-1 annihilation of the current African Champions, Algeria, and their Men’s Team losing to Reunion 3-2. Uganda was set to register double wins in both categories but Reunion had other plans. With the score level at 2-2, it was up to the experienced pair of Brian Kasirye and Israel Wanagalya to bring it home for the Ugandans. Assing Aaron and Chang Fung Ting fought tooth and nail to recover from their loss in the first game and beat the Ugandans 2-1. Reunion is now poised to qualify from group B of the Men’s Team event if they beat Benin.

The matches continue tomorrow and will be streamed live on BCA’s YouTube Channel.

Check out the full results on the link below.